A true to type macho with outstanding fleece characteristics.

Herts Alpacas Nigel is a product of our highly acclaimed breeding programme. This stunning solid medium brown macho really has it all.

Nigel’s fleece exhibits great uniformity with long, dense, extremely fine, crimpy, well aligned bright bundles which are even in colour throughout the blanket and into his extremities. He has amazing coverage from top to toe.

Nigel is one of those ‘stand alone’ males that commands the respect he has been given, both in the show ring and in the field.

The mere visual impact of him demands a closer look being a true to type macho with a strong boned frame, amazing fleece characteristics and a lovely temperament.

All fibre testing carried out by SGS

His dam Zanita a full Peruvian, is one of our finest breeding females, her 12th fleece (2013) was still only 22 micron.

This male is the complete package!

Even as a senior he is still showing a high frequency crimp with great definition and even micron down through the brisket and even the legs, excellent coverage with great length. 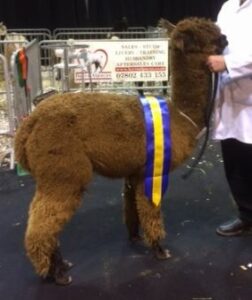 Nigel is a breeders dream putting his stamp on all his progeny carrying through his stunning frame, excellent fleece characteristics and lovely temperament. 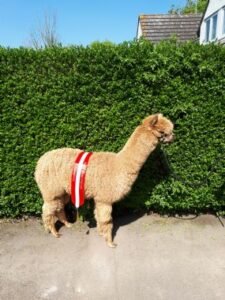